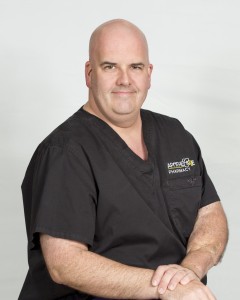 Keith Jones has been with Apothecare Pharmacy since we opened in 1990. He is the manager of general affairs and serves as the head pharmacy technician and chief compounder. He is also responsible for managing IT, security, and robotics. He is the “go to” person for any insurance issues as well.

Keith grew up in a pharmacy. His parents were the owners of the Point Marion Pharmacy, where he helped them with various daily functions after school.

A member of the Professional Compounding Centers of America, he is also a member of the Uniontown Apple Computer Club, Radio Club, and Federal Emergency Management Agency. He also does consulting work for CCTV Systems and Advanced Microprocessor Systems. Keith also participates in the Uniontown School District PTO.

Keith earned an associate’s degree in medical assisting from the Sawyer School of Health, Pittsburgh, Pa. He is a member of the Professional Compounding Centers of America.

He enjoys spending time with his wife Suzanne and daughter Isabelle. They reside in Uniontown and attend Calvary United Methodist Church.